Having performed more than 16,000 surgeries, 2,000 of which were performed on skull base tumors and aneurysms, renowned neurosurgeon Anil Nanda is considered an expert in several advanced neurosurgical techniques. He specializes in skull base, vascular, and spinal neurosurgery, including Gamma Knife radiosurgery. 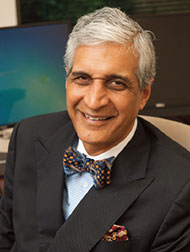 Nanda earned his medical degree with honors from Jawarhalal Institute of Postgraduate Medical Education and Research at Madras University in India. He completed residency training in surgical oncology at Memorial Sloan Kettering Cancer Center in New York; in general surgery at Rush-Presbyterian-St Luke’s Hospital in Chicago, in neurosurgery at Hahnemann in Philadelphia; and in pediatric neurosurgery at Children’s Hospital of Philadelphia. He also completed a fellowship in microneurosurgery and cranial base surgery at the University of Pittsburgh.

The Peter W. Carmel, M.D. Chair of Neurological Surgery is named for the chair emeritus of the Department of Neurological Surgery at the former University of Medicine and Dentistry of New Jersey and an internationally prominent pediatric neurosurgeon. The chair was established in 2015 with generous gifts from an anonymous donor, the University Physician Associates-Neurosurgery, the Foundation for Pediatric Neurosurgery, Carmel, his friends, and Jacqueline Bello, a former member of the neurological surgery faculty at NJMS.

What is the most personally fulfilling aspect of your work?

I feel blessed to be leading such a great department with enormous potential.

What elements of your work are the most challenging?

Despite our advances, some diseases can have devastating consequences

How would you describe the quality of neurological studies and surgery at Rutgers?

I feel this is a world-class operation with great research and outcomes.