Andy and Lisa Kaplowitz have practiced and preached the importance of investments during their careers in finance. These R Fund supporters – Andy, a ’95 Rutgers College graduate, and Lisa, a Brown University graduate and Athletics Hall of Fame inductee – have taken that advancement mindset to Rutgers Athletics, a program on the rise like the hottest stock on the market. 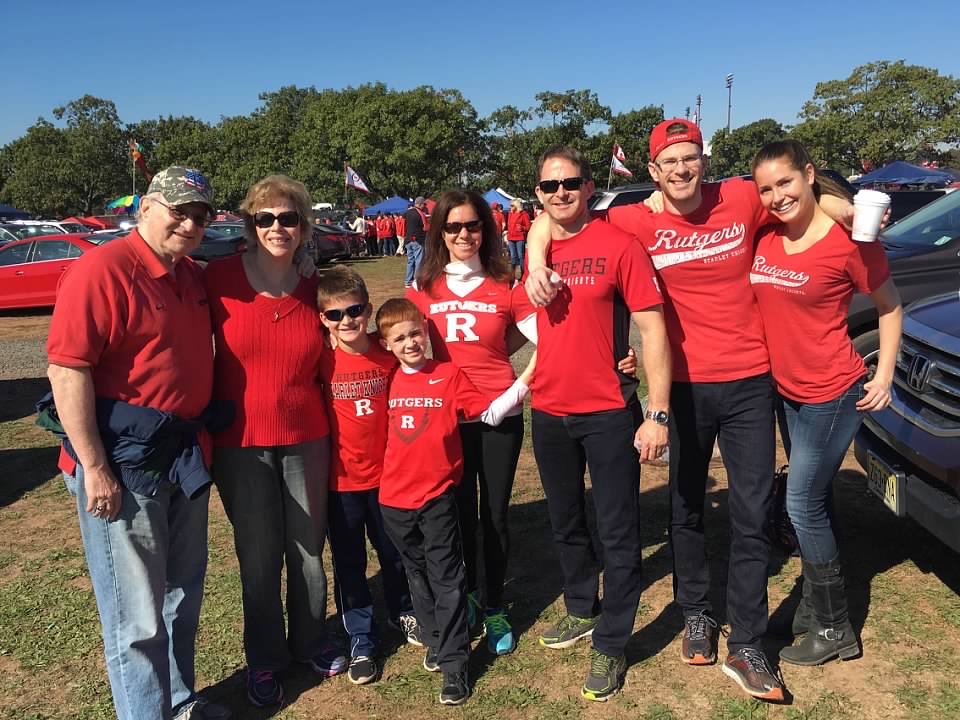 From the Banks of the Old Raritan to the banks of Wall Street, Andy has since forged a family and spun stories of success rooted in his education and experience at Rutgers College. He invested in himself during his formative years, when scrappiness and grit pushed the young man to new heights. Now, the Kaplowitz Family Scholarship supports two athletic scholarships for the Scarlet Knights, inspiring the cyclical nature of investing in the future.

“Rutgers has been a huge part of my life and a huge part of my family,” says Andy, a Henry Rutgers Scholar in economics. “My education prepared me to succeed in a competitive landscape. We want to give young people that same opportunity, to learn to fight for your own way and use it for good in the world.”

The Kaplowitz Family Scholarship is an endowed fund supporting two female student-athletes, a strategic cause ingrained in the family’s history and Lisa’s own life-changing experience as an elite gymnast at Brown.

Lisa did not just marry into the Kaplowitz family, she fully immersed herself in the “family business.” Lisa left her career as an investment banker and CFO to become a finance professor at Rutgers Business School, extending the Kaplowitz lineage in academia. Andy’s parents are both Rutgers professors, Dr. Susan Kaplowitz, in the department of kinesiology health, and a 2020 Presidential Award for Excellence in Teaching recipient and Jeff Kaplowitz in the department of labor studies. Susan also founded the Center for Exercise and Aging on campus 20 years ago, which will stand as her legacy.

Following in her mother-in-law’s footsteps, Lisa established the Center for Women in Business at Rutgers Business School. The center’s mission: Through education, opportunities and thought leadership, we will remove barriers, build community, and empower women with the confidence and skills necessary to succeed as business leaders.

Lisa’s personal mission is to continue to remove barriers for women, in this case by giving two Scarlet Knight women a head start.

“The skills athletes acquire on the court, in the gym and on the field – leadership, teamwork, time management, confidence, work ethic, etc., are what make us better leaders, better team players and better co-workers after graduation,” Lisa said. “In addition, your team is your first network and relationships athletes have with their teammates continue well after that last game was played together.”

Lisa credits her professional success to her 18-year athletic career. A three-time Eastern College Athletic Conference champion, Lisa graduated as the ECAC record holder on the un-even parallel bars and an advocate for the advancement of women’s sports. 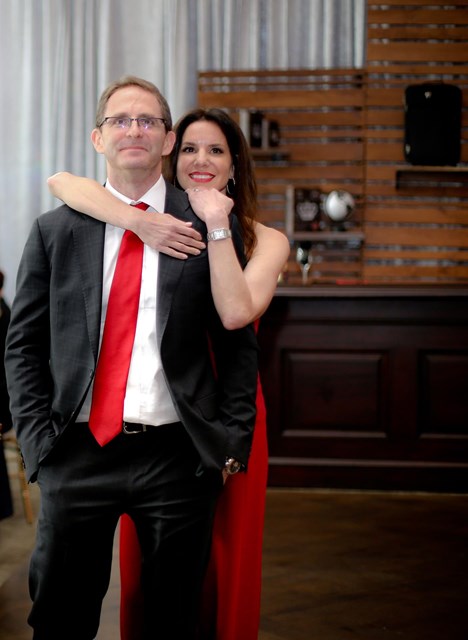 Following a 25-year standout career in finance, she continued her advocacy “On the Banks” upon entering academia. Lisa created the Center for Women in Business with a focus on three things: increasing the representation of women in all levels of management, understanding the additional challenges of intersectionality, and ensuring that men are participating in the conversation and the solution. She has been active with Rutgers’ Department for Leadership Development and Strategic Partnerships and actively fundraises for the RU Board of Overseers.

“What Lisa does for this school is tremendous,” Andy said. “We greatly value our degrees and wouldn’t be where we are without them. We support these scholarships because it’s something we believe in. We want to remove one element of stress for these students, elevate the quality of the athletic programs and continue the cycle of giving. These young student athletes will be the leaders of tomorrow and our hope is that they remember the positive experience of being a student athlete and pay it forward by creating similar scholarship opportunities for the next generation.”

Andy has given back beyond monetary donations, as well. He mentors students on term projects through the RBS Road to Wall Street program and speaks with students when he guest lectures at the business school.

He has been attending Rutgers football games since childhood, another family trait passed down to the new generation. Lisa and Andy’s children also have been going since birth.

Lisa and Andy were planning a ski trip this past March. Andy made the call to cancel it back in January, having full faith that men’s basketball would complete a breakout season with its first NCAA Tournament bid since 1991 – Andy’s first year of undergrad. The bid was anything but locked up in January, but the choice was instantaneous.

“Only a true Rutgers fan would know how easy that decision was,” Andy said. “That’s the level of excitement we have for Rutgers Athletics. There was no place we would rather be. My family has been Rutgers Proud for decades, and we are as close as ever to being one of the top programs in the nation, where we belong.”

Andy’s brother, Jon – also a Rutgers economics graduate (Class of 2000) and currently Head of Penn Interactive – started his own economics scholarship at the school, along with his wife Nicole, a Phd from Clemson.

Andy calls the family scholarships at their alma mater a “ringing endorsement” for the powerful connection between the family and the school. In this case, family goes well beyond blood. The generational history on Rutgers’ grounds runs deep, yet it only scratches the surface of the expanding a bloodline born from a shared passion.

“The biggest differentiator is experience,” Andy says. “Over time, you rise through the ranks with a Rutgers degree and there is a built-in advantage being near New York, in addition to Rutgers’ massive alumni network. What I enjoy most is showing young professionals that they can accomplish anything, and it starts at Rutgers.”