Home  |  News and Stories | Debra Laskin, the Roy A. Bowers Chair in Pharmacy

Pollutants, chemicals may cause macrophages to promote tissue damage, disease

Macrophages are large white blood cells that are an important part of the body’s immune system. But Debra Laskin, an internationally recognized authority on immunotoxicology and holder of the Roy A. Bowers Chair at Rutgers University–New Brunswick, has found that when exposed to toxins, macrophages can actually promote tissue damage and disease development. 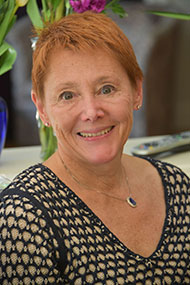 Laskin, who is also chair of the Department of Pharmacology and Toxicology at Rutgers’ Ernest Mario School of Pharmacy, has deep expertise in immunology, pulmonary physiology, lung pathology, and tissue injury. Her research focuses on immunotoxicology, with an emphasis on the inflammatory mechanisms of tissue injury and macrophages. Her lab has found that lungs exposed to air pollutants or poisonous chemicals tend to accumulate macrophages. Although macrophages are known to protect against pathogens and tumor cells, Laskin’s research shows that macrophages exposed to toxins can hyperactivate and cause inflammation.

Laskin and her colleagues are working to develop systems that transport inhibitory drugs to hyperactive macrophages. “These studies are particularly exciting,” she says, “since they will likely lead to the development of highly novel approaches not only to mitigating lung toxicity induced by toxic chemicals but also for treating inflammatory diseases such as asthma.”

Laskin earned a doctorate in pharmacology/toxicology from the Medical College of Virginia at Virginia Commonwealth University. She held a postdoctoral fellowship in immunology at the University of Pennsylvania’s Wistar Institute.

Her numerous awards include the Burroughs Wellcome Toxicology Scholar Award, a national award presented to distinguished scholars in the biomedical sciences. The National Institutes of Health (NIH) and other government agencies have funded her work for more than 25 years.

Robert E. Martini, a longtime friend of the Ernest Mario School of Pharmacy and the former board chair of the pharmaceutical distribution and services company AmerisourceBergen Corp., established the Roy A. Bowers Chair in 2002 to recognize his friend and mentor. Bowers served as dean of what was then Rutgers’ College of Pharmacy from 1951 to 1978 and was president of the American Association of Colleges of Pharmacy. He wished to be remembered for “transforming a small isolated professional school half a mile away from Rutgers’ Newark campus into a modern, state-of-the-art institute in the heart of Rutgers’ Busch science campus in Piscataway.”

How would you describe the promise your research holds?

It is now widely recognized that overactive inflammatory macrophages play key roles in the pathogenesis of many diverse diseases, including fibrosis, atherosclerosis, asthma, and emphysema, as well as cancer. Understanding how to harness the activity of these cells and reprogram them so that they promote wound repair will facilitate the development of therapeutics to reduce the burden of disease.

What aspects of your work are most professionally fulfilling?

I began studying macrophages when I was in graduate school. At the time, all we knew about these key cellular effectors of innate immunity was that they were highly phagocytic and cytotoxic. Over the course of my 35-year career at Rutgers, I have made seminal contributions to our understanding of the role of these cells in disease pathogenesis. Most notable was our discovery that macrophages consist of phenotypically and functionally different subsets that play distinct roles in the response of the body to toxicants. My work has been continuously funded by the NIH for over 35 years and I have received numerous awards, demonstrating the impact of our discoveries. It is this aspect of my work that I find most professionally fulfilling.

What elements of your work can be frustrating?

The most frustrating elements of my work are related to declining funding available for basic research. With changing economic times and politics, NIH funding has declined; obtaining research grants has also become more competitive. It is difficult not to be frustrated by fewer research dollars being available and larger numbers of investigators applying for grants.

How do you describe the graduate and undergraduate students who work with you?

Training and mentoring students is one of the most important and rewarding aspects of my position at the university. Students at Rutgers are among the best in the country. Students that I have worked with possess an intellectual curiosity and enthusiasm that is remarkable. I love watching these young scholars grow and develop into independent thinkers and make significant contributions to the scientific community.