Scholar Harnesses the Power of Economics to Improve Lives

Distinguished economist Jennifer Hunt’s work centers on immigration and wage inequality, unemployment, the science and engineering workforce, the transition from Communism, and crime and corruption. Hunt holds the James Cullen Endowed Chair in Economics in the School of Arts and Sciences at Rutgers University–New Brunswick. 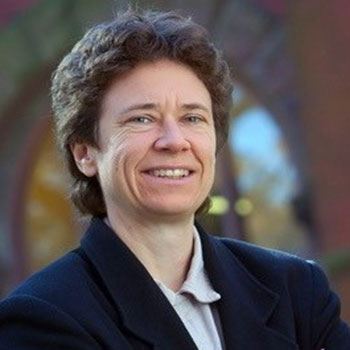 Hunt was a professor of economics at Rutgers from 2011 to 2013, when she became chief economist at the U.S. Department of Labor. There she briefed officials on statistics and wage trends and contributed to the debate on policy issues ranging from the minimum wage to new labor regulations to the Social Security Trust Fund.

In 2014, Hunt became the deputy assistant secretary for microeconomic analysis at the U.S. Department of the Treasury, where she worked on policy issues that included reforming the student loan system, income inequality, occupational licensing, and the solvency of Social Security and Medicare, often in conjunction with White House economists or staff at other agencies.

Hunt resumed her work at Rutgers in 2015. “We are proud that many Rutgers economists have shared their expertise with all levels of government,” says Peter March, executive dean of the School of Arts and Sciences. “Professor Hunt’s research, and that of her colleagues, addresses many of the day’s most important economic issues, and their eagerness to share their knowledge provides a valuable service not only to policymakers but to all citizens.”

Hunt, who earned her doctorate in economics from Harvard, has also held posts at McGill University, the University of Montreal, and Yale. She is a research associate at the National Bureau of Economic Research; a research fellow at the Centre for Economic Policy Research and the Institute for the Study of Labor; a research professor at the German Institute for Economic Research; and an external fellow at the Centre for Research and Analysis of Migration. She is co-editor of The Journal of Human Resources and associate editor of Journal of Labor Economics.

The James Cullen Endowed Chair in Economics was established by Verizon and Rutgers in honor of James Cullen RC’64, who majored in economics at Rutgers and served as president and chief operations officer of Bell Atlantic (now Verizon).

The reason I changed my field of study from engineering to economics in 1987 was concern about unemployment, which rose suddenly in Europe in the 1980s to cause distress to individuals and ravage communities. My motivation in my research has remained finding ways to help less well-off workers.

What was the most positive or fulfilling aspect of your service in Washington?

The great opportunity government service afforded me was to use the lessons from my research and teaching to influence regulations and laws, and even to influence which labor market problems should be addressed. What I found most energizing in government was to work with a large team of people all motivated like me to reduce unemployment and raise the wages of low-paid workers. The cooperation involved working with noneconomists in my own agency, collaborating with economists across the administration, and working in interagency groups of people with varied expertise. Through the rapid succession of projects I worked on, I learned much about both economics and the details of policy implementation.

What do you hope resonates with your students?

I hope that my students recognize the power of economics as a framework for understanding society and the importance of careful interpretation of data for testing any hypothesis and implementing any policy.

What is the most fulfilling aspect of your work now?

The most fulfilling aspect of my academic work is using data and ingenuity to assess the impact of government policies on workers’ lives.

The James Cullen Endowed Chair in Economics is now held by Anne Morrison Piehl. To learn more about her, click here.