An award-winning journalist teaches his students about the power of investigative reporting to help right society’s wrongs.

Acclaimed journalist Juan González, a professor of communications and public policy at Rutgers’ School of Communication and Information, was a columnist for the New York Daily News for nearly 30 years. His columns often focused on urban affairs, municipal land use and tax policies, public education, criminal justice, race relations, trade unions, immigration, and the Latino community. 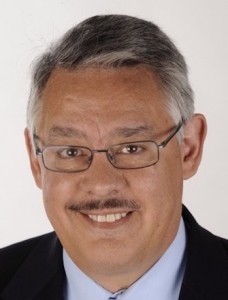 González, a two-time winner of the prestigious George Polk Award for his “unflinching” investigative reporting, devoted much of his work to exposing “injustices visited upon the powerless.” He was the first reporter to question government officials’ insistence that the air around Ground Zero was safe after the 9/11 attacks on the World Trade Center. In 2015, the Society of Professional Journalists’ New York City chapter inducted him into its Journalism Hall of Fame.

González, who frequently co-hosts Democracy Now!, an international independent news program, is a member of the National Association of Hispanic Journalists Hall of Fame. Hispanic Business Magazine named him one of America’s most influential Hispanics, and he earned a Lifetime Achievement Award from the Hispanic Academy of Media Arts and Sciences.

He is the author of four books: Fallout: The Environmental Consequences of the World Trade Center Collapse; Harvest of Empire: A History of Latinos in America (a required textbook in nearly 200 Latino history and ethnic studies courses); Roll Down Your Window: Stories of a Forgotten America; and Reclaiming Gotham: Bill de Blasio and the Movement to End America’s Tale of Two Cities. He also coauthored News for All the People: The Epic Story of Race and the American Media.

What do you hope your students take away from their studies with you?

I try to teach my students that great journalism requires hard work, perseverance, and courage. It means digging deep below the surface chatter of press releases, official statements, and social media posts. I teach them how to obtain and interpret obscure data and official reports that are not always readily available, how to find and interview ordinary people directly affected by government policies and corporate practices, and how to fashion all the material they collect into a gripping visual or written narrative.

What is your proudest achievement?

During 40 years of writing for commercial newspapers, I produced more than 4,300 stories, several of which prompted significant reforms in government policy or the redress of some little-known injustice. But my proudest achievement is that 80 percent of those stories resulted from my own initiative or tips from readers, not from waiting for some editor to hand me an assignment. That’s why I always tell my students to go find the big stories, don’t wait for them to find you.

How has journalism changed over the course of your career?

Technological change has been a hallmark of mass communications for centuries, and the digital age is no different, except that each new medium also rewires how our brain processes information. This has never been truer than with social media, which is where most Americans get their news these days. Our brains have been gradually rewired by social media and smart phones to tolerate only short posts, to prioritize scandal and sensation over depth and nuance. As Marshall McLuhan once said, “The ‘content’ of a medium is like a juicy piece of meat carried by the burglar to distract the watchdog of the mind.”

What impact do you hope to have?

Keeping alive the belief that great journalism can still awaken society to make qualitative improvement in people’s lives, that it can still “comfort the afflicted and afflict the comfortable.”

This story is part of Rutgers University Foundation’s Endowed Chairs Impact series. Supporting professorships and research helps spark innovation and creativity here in New Jersey and beyond. To talk with someone at the foundation about creating an endowed chair or professorship, please contact Christopher Needles RBS’97, vice president for development, at christopher.needles@ruf.rutgers.edu or 848-932-2227. If you would like to contribute to an existing professorship or a research project, visit our giving portal for a list of the most up-to-date funding opportunities.