Neuroscientist works to unlock the mysteries of Alzheimer’s disease and dementia in efforts to create new therapies.

Luciano D’Adamio, an internationally renowned expert on Alzheimer’s disease, is the inaugural holder of the Krieger Klein Endowed Chair in Alzheimer’s Disease and Neurodegeneration Research. The chair was established with a 2015 gift from former U.S. congressman Herbert C. Klein and his wife, Jacqueline Krieger Klein, who died of Alzheimer’s disease in 2017, and an anonymous donor who provided matching funds to create new chairs for Rutgers. 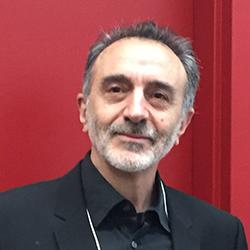 More than 6 million Americans live with Alzheimer’s disease and dementia. As the population ages, the number of citizens with these diseases will grow. Alzheimer’s is the sixth-leading cause of death in the United States. The financial costs of caring for people with these conditions are staggering, as is the impact they have on patients, families, and friends. So far, there are no viable treatments to prevent these brain diseases or alleviate their multiple symptoms.

D’Adamio is trying to change that by leading promising research conducted at the Rutgers Alzheimer’s Disease and Dementia Research Center, part of the Brain Health Institute. He and his lab take an innovative approach to unlocking the mysteries of degenerative brain diseases, with an eye toward the creation of new drugs to combat them. The center plans to develop a dementia clinic for patient evaluation and treatment and for testing new therapies. Its researchers also conduct basic and translational research, using human genome information to identify novel biomarkers and to develop stem cell models of Alzheimer’s disease and dementia.

D’Adamio’s contribution to the field of Alzheimer’s disease has been recognized with the 2001 Alzheimer Award from the Journal of Alzheimer’s Disease, the 2011 Zenith Award from the Alzheimer’s Association, and awards from the Irene Diamond Foundation and the Edward N. and Della L. Thome Memorial Foundation. He has published more than 97 peer-reviewed articles in journals such as Science, Cell, and Neuron.

D’Adamio holds a medical degree from the University of Perugia in Italy and a doctorate from Sapienza University in Rome. He did his thesis work at Harvard Medical School’s Dana-Farber Cancer Institute and was a principal investigator at the National Institutes of Health. His lab there was the first to identify the role of cell-death pathways in Alzheimer’s disease, sparking his interest in neurodegeneration. He holds five patents on his discoveries and is the scientific co-founder of three companies—RemeGenix, Kappa Lifescience, and SienaGen.

How much progress has Alzheimer’s and dementia research made in the past decade?

The most progress has been made in understanding the genetic components of dementia. These new genetic data suggest that other cell types, not only neurons, contribute to dementia pathogenesis.

What do you hope this research looks like five years from now?

That we acquire a better understanding of mechanisms causing dementia and that we can develop drugs that can normalize these mechanisms.

What approaches for treatment or a cure hold the most promise?

Approaches aimed at determining the main factors causing dementia. When we understand those, we can develop ways to correct them.

What do you find most personally fulfilling about your work?

I would find it fulfilling if our work would contribute to understanding the normal function of the brain, how malfunctions cause disease, and how ro correct these malfunctions.

Make a difference by supporting Alzheimer’s and memory loss research at Rutgers.