Neuroscientist on a Mission to Develop Treatments for Parkinson’s Disease

M. Maral Mouradian is a professor of neurology at Rutgers Robert Wood Johnson Medical School (RWJMS), the founding director of the RWJMS Institute for Neurological Therapeutics, and vice chancellor for faculty development at Rutgers Biomedical and Health Sciences. She is also chief of the Division of Translational Neuroscience and director of research in the Department of Neurology at RWJMS. 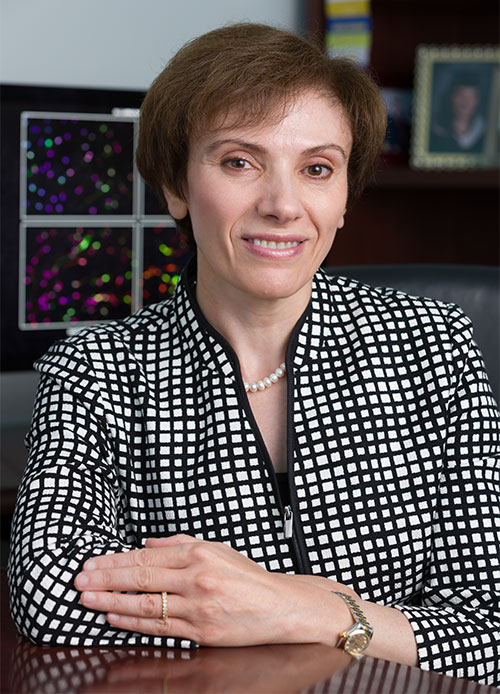 Mouradian is the leader of a Rutgers team of scientists who discovered that a compound in coffee may help fight Parkinson’s disease and Lewy body dementia. The finding, published in Proceedings of the National Academy of Sciences, suggests that this compound, particularly when combined with caffeine, may reduce the risk of developing these degenerative brain diseases and has the potential to be used therapeutically to slow their progress in patients. Nearly 1 million people in the United States have been diagnosed with Parkinson’s disease, which can lead to difficulty with walking, balance, and coordination. Lewy body dementia, which also affects more than 1 million people in this country, disrupts thinking, behavior, mood, and movement.

Mouradian earned her medical degree with distinction and membership in Alpha Omega Alpha Honor Medical Society from the American University of Beirut in Lebanon. She did her neurology residency at the University of Cincinnati Medical Center. She then completed fellowships in molecular biology, neuropharmacology, movement disorders, and Parkinson’s disease at the National Institutes of Health (NIH). She is the editor in chief of Neurotherapeutics, the official journal of the American Society for Experimental Neurotherapeutics. She holds several patents and has published many peer-reviewed manuscripts in high-impact journals. She has received multiple grants from the NIH and disease foundations, including the Michael J. Fox Foundation for Parkinson’s Research and the American Parkinson Disease Association.

Why did you choose to specialize in this field?

I was always curious about the human brain, its complexity, the diseases that affect it, and the neurotransmitters that control its function. I was also interested in pharmacology early on in medical school. As my career progressed, I combined these interests to identify new compounds that can treat neurological diseases. And for a very long time, Parkinson’s disease was the only neurodegenerative disorder that could be treated very effectively with the drug L-dopa, at least in the early stages. No other neurodegenerative disease has such a dramatic treatment to this day. So I found this disease of interest to investigate and develop treatments that slow or stop its progression and also mitigate the long-term complications of L-dopa use.

What have been your proudest achievements so far?

My proudest achievement so far is the work that I did early on in Parkinson’s disease. Using clinical neuropharmacological studies, I showed that the conventional way of administering L-dopa, which is typically a pill taken a few times a day, is not ideal and in fact leads to long-term complications. I also showed that delivering this drug continuously with a pump takes care of the complications in the short term and may even prevent them in the long run. This line of investigation prompted the pharmaceutical industry to develop new formulations of L-dopa to deliver it continuously via a pump or as controlled-release pills. The same principle is being applied to other anti-Parkinson drugs. The reason I chose this line of investigation as my proudest is because it has already made an impact on how patients are treated today. I have since identified other new therapeutic approaches to slow down or stop progression of the disease. I am proud of those, too, but they are in the pipeline in the laboratory and hopefully will become available to patients over time.

What aspect of your work is the most challenging or frustrating?

Because we have a clear goal to develop better treatments for patients, time is critical, particularly knowing that patients are suffering and waiting for cures. So balancing the various commitments we have in academia and also prioritizing projects and aligning them with resources can be challenging.

What aspect of your work is most rewarding?

Most rewarding is to make a difference for patients and improve their quality of life, and training and mentoring the next generation of scientists and physician-scientists in the conduct of translational research in neurological therapeutics. That is the multiplier effect.