Shridar Ganesan, the inaugural holder of the Omar Boraie Chair in Genomic Science at Rutgers Cancer Institute of New Jersey, is internationally recognized for his expertise in cancer genomics and molecular biology, especially the biology of hereditary breast cancer and the basic mechanisms by which cells repair damage to DNA. He and his colleagues have identified which cancers are likely to respond well to cancer therapies, including targeted therapy and immunotherapies, and are working to identify novel biologic vulnerabilities in individual cancers that can be targeted by new drugs. 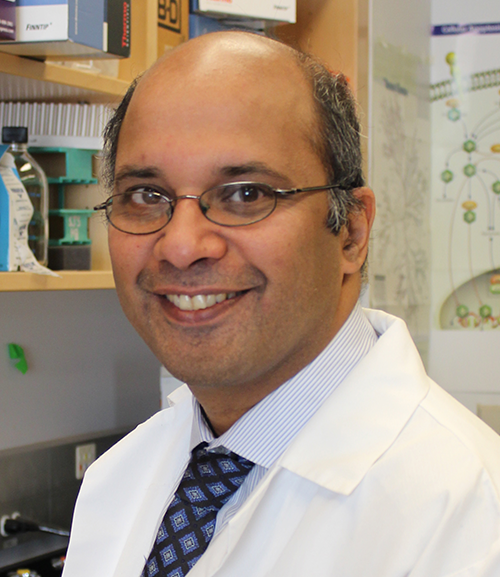 Ganesan believes that Omar Boraie’s gift to support his endowed chair is essential to his work. “This support enabled me to pursue novel investigations in cancer research that would not otherwise have been possible,” he says. “In these days of decreasing funding from the National Institutes of Health and traditional sources, the role of private donations is critical to spur innovative and impactful cancer research. We have learned through the years that cancer is not a single disease, but rather a collection of diseases, each with unique features. Instead of determining cancer type by only the organ in which it originates, genomic analysis opens the door for additional classification by identifying the set of changes present in each cancer that drives its growth, which can guide more precise—or tailored—therapy.”

Boraie, who earned an undergraduate degree in chemistry in his native Egypt and pursued a doctorate at Rutgers, has high hopes for the research conducted by Ganesan and his colleagues. “Physician-scientists at Rutgers Cancer Institute are making significant advances with precision medicine for those patients whose cancers are no longer responsive,” he says. “Imagine being able to apply that science to all cancer patients!”

Ganesan, who graduated from Yale University with a medical degree and a doctorate in cell biology, completed his medical residency at the Brigham and Women’s Hospital in Boston and was a fellow in medical oncology at the Dana-Farber Cancer Institute. His many honors include the Hero Award from the Triple Negative Breast Cancer Foundation in 2016, the Sidney Kimmel Foundation’s Kimmel Scholar Award in 2006, the National Cancer Institute’s Howard Temin Award in 2004, and the Howard Hughes Medical Institute’s Postdoctoral Research Fellowship in 1999. He also is a professor of medicine and pharmacology at Rutgers Robert Wood Johnson Medical School.

The Boraie Chair was created by a gift from Omar Boraie’s family and a matching gift from an anonymous donor. Boraie, a real estate developer who has been instrumental in revitalizing New Brunswick, New Jersey, now hopes to make it a “health care city. My goal in life,” he says, “is to see New Brunswick be the center of research and development, and the Rutgers Cancer Institute to be the largest in the United States.”

Boraie supports many vital causes and institutions, including the Bristol-Myers Squibb Children’s Hospital. His conversations with young cancer patients there inspired him to support Rutgers’ efforts to identify cancer treatments that can be customized to fit the genetic profile of a patient’s cancer.